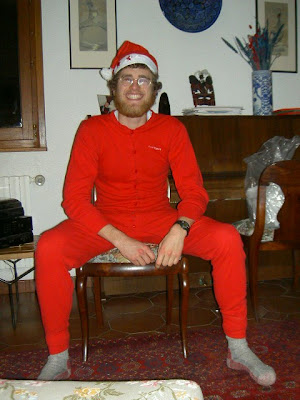 It's that time of year again and as usual, we here at Ho12 Industries are rolling out the welcome wagon for our good pal SANTA! Come sit on Santa's lap and tell him all your dirty little secrets! (no kids) Remember we get our Santa directly from the North Pole Santa Intern Program, while they haven't been vetted for perversion or drug use, they are official representatives of Saint Nick himself.

Bring your pencils, pens, paper and desire for Red Suited boners to:

Ho12's own Kevin Colden is doing some classy signings around the Tri-State area over the next few weeks, for his great new G-novel, Fishtown. If you are around, go see him and poke him in the belly.

Posted by Cheese at 5:06 PM No comments:

The Beards of SPX

If you have gone to the Small Press Expo over the last few years you've more the likely noticed the abundance of BEARDOS. As a tribute to the men of SPX, young and impressed with their own puberty, Team 12 went on safari. A Weird Beard Safari. Each of us was tasked with hunting down and capturing the most impressive display of beardism at the show. Here are the results:

First up is Kate Allen's entry, "The Beau" 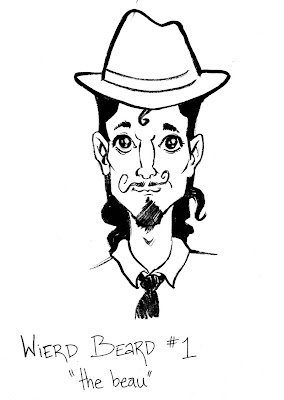 Note the stringy hair and the 'is that a beard or is it chocolate cake' soul patch, all wonderful, but it's the wispy, curly-cue mustache that really tops off this history honoring beard/mustache combo. 1870, here we come!


Kevin Colden's "Beard on a Wire" 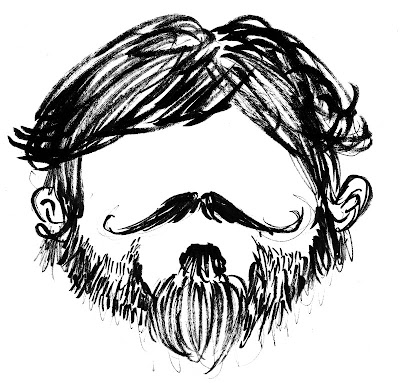 A bold and truly American beard, with a french twist! Part Grizzly Adams, part North American Indie Rocker; this ensemble is as classic as it is beautiful. Since it's inception in the mid 1990's it's become one of several "standard uniforms" for nerds everywhere; this particular variant includes a nod to our E.U. brothers with it's distinctive French Flip on the mustache. Here, Kevin captures the beard at it's most pure, needing no wearer, the beard stands alone.

Cheese with "Science Hair of the Face" 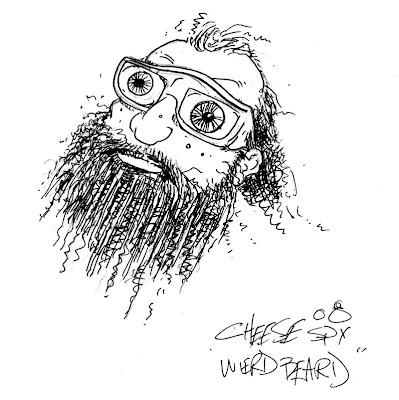 The chaos theory has never been so proven as with this amazing representation of the American Nerd. It's distinctive frizz and texture communicates, "I am comfortable with my face and hair resembling a pile of steel-wool and pipe cleaners." A bold statement, indeed. What truely brings the whole package together here is the addition of the safety goggles. Who hasn't been to a comic book convention and said to themselves, "Y'know, what I really need to bring next year is some safety goggles." BE PREPARED! 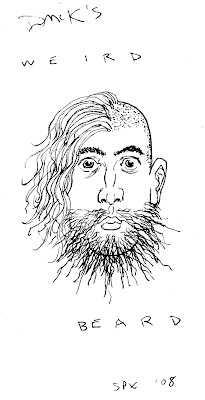 Nowhere in a the annuls of fashion does it say that one's hair should be symmetrical, in fact some of modern style makers are renown for their off-center daring. Here is a perfect example. What Mom wouldn't be proud of her little angel sporting this inventive and heart-warming combination that screams both, "I am thirty cents from being homeless!," and "I am on discount, Canadian medication!" equally loud and with such conviction. A masterpiece! 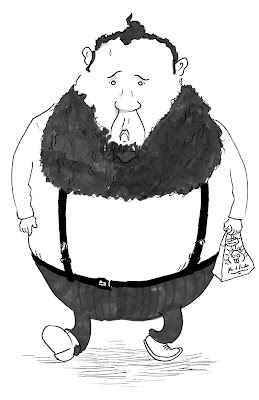 SPX has it's fare share of fatties, but to tell the truth, compared to other comic book events it's pretty sickly. It is here that a true man of girth can take a stand and shout out with pride, "You're all poseurs!" Such is the case with the above subject. Not only does he outdo the 16th President with his stylish "Lincoln++" chin defining neck-beard, but he subtly lets his preposterous size speak volumes about the state of the geek community. He says, where'd all you hipster bastards come from, take your motherfucking girls and go home. Leave comics to the fat and unwashed, as nature intended!" He is a statesman.


In the car on the way home, the entries were studied, examined for authenticity and voted upon. It was a close race, but in the end, Dave McKenna's "Piltdown Man, Alive!" won the day. Mr. McKenna was awarded a copy of a book I can't remember the title of, but he seemed to enjoy it. Congrats Dave!

We all look forward to next year when we can again go on another WEIRD BEARD SAFARI!
Posted by Cheese at 3:52 PM No comments:

It seems S. Clay Wilson, famed underground cartoonist from the late 60's and beyond, was either mugged and beaten or fell down too many times on his way home from the bar and now has been diagnosed with severe brain damage.
Wilson was one of the first underground artists I got into, thanks to some early Mtv animated promos (child of the 80's, gimme a break) featuring his Checkered Demon cartoons. He and I share many similar interests: beer, pirates and goatees. Not to mention a belief that sex and violence are a legitimate artistic endeavor. He drew some of the most lurid art of his generation, and while he certainly had his fans, he never gained the prestige of some of his peers. He never became the 'World's greatest living artist' that Crumb is, or achieved the gallery success and artistic legitimacy of Robt. Williams; but he happily ruled his moderate kingdom, content to be surrounded by loved ones, booze and madness. He is in may ways, my hero. I hope he either recovers completely and quickly, or dies just the same way. I raise my glass to him today, Get Well Soon/Vaya con Dios. 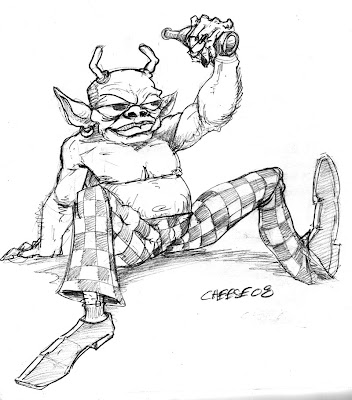 So I posted a mention of the demon doodle on Bruno/Hugo's blog and he challenged me to draw another Wilson character, Ruby the Dyke. Thing is, I can't remember what she looked like, so I did this instead, inspired by S. Clay Wilson. 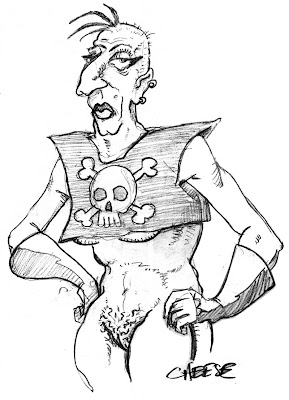 Posted by Cheese at 3:55 PM No comments:

I mentioned a while back that I had recently been in an art show, a tribute to Gary Gygax. I recreated a math notebook of a high school student with some totally kick ass D&D drawings in it. I'm eventually gonna get some better scans of the stuff and publish it, but here are some of the drawings. Some are black and white, some are in color. I drew them into an actual notebook and am have trouble balancing the white while keeping the blue lines in. Troublesome. But nonetheless, here they are. 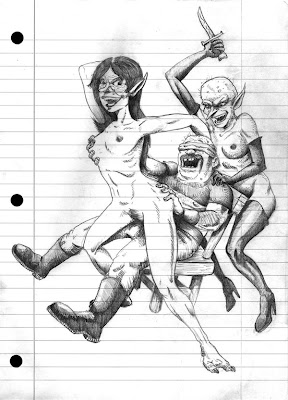 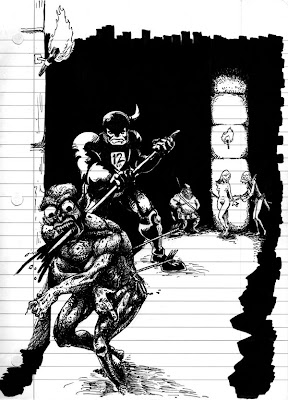 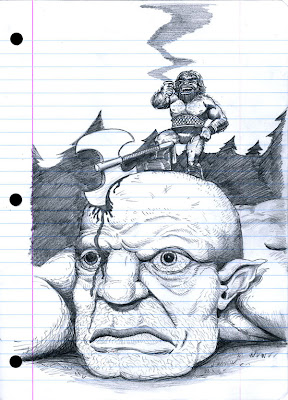 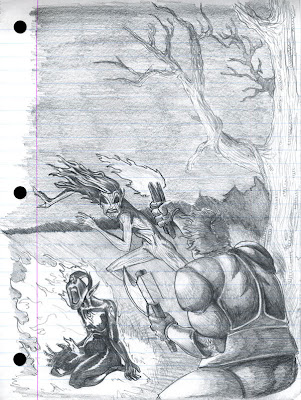 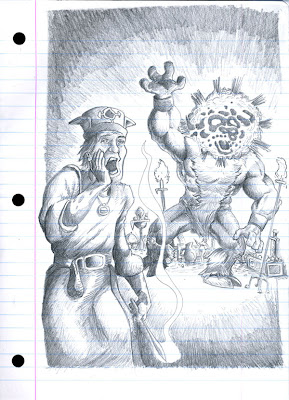