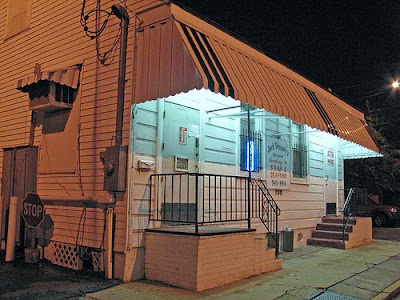 Interesting FACT: If the jams were held in the Lower 9th Ward in New Orleans, we'd meet at this Jack Demsey's. They have better onion rings. But alas, we don't live on the bayou, we live in the the big city, so we will have to — at least for the time being — meet at our own JD's. Be sure to bring your pens, pencils and your mom.

BONUS: It's both Dave and I's Birthdays, so bring us gifts.
Posted by Cheese at 12:50 PM No comments: 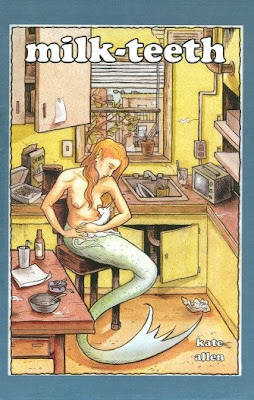 Tom Spurgeon and I haven't always seen eye to eye, but I respect his opinion and his obvious love of comics. Earlier this week he wrote up a nice little review of Kate Allen's Milk-Teeth, which I mentioned before was a big hit for the Ho12 table at SPX this year.

He likes it a lot.

At the end of SPX, Kate walked up to me and gave me a very sweet - if slightly creepy (in a good way) - drawing of my baby daughter, which I was extremely touched by! So I was even more pleased when I got home and discovered that I liked her comic [Milk-Teeth].

Kate also has started a new blog of her own, she's got a little SPX report up there now, more to follow I am told.

Check it out to the big dog.

Another well deserved rave for Milk-Teeth from our Canadian pals over at Inkstuds. Bravo!

You can buy Milk-Teeth here.
Posted by Cheese at 12:33 PM No comments:

Hey, whattaya know, a post that isn't about monsters!

Local Greenwich Village/L.E.S. newspaper, The Villager, has a write up about longtime Ho12 contributors Miss Lasko-Gross and Kevin Colden. The author has a bit of an obsession with 'Maus' but it's worth a read nonetheless.

PS - In the interest of full disclosure, I am the Art Director of The Villager, and yes, I suggested the guy talk to them.
Posted by Cheese at 1:51 PM No comments:

Having an Aneurism.
Posted by Cheese at 9:44 PM No comments:

POE is apparently afraid of some pretty sissy shit.

Claustrophobia of the feet.

Losing your hands (ok, that one kinda spooks me too)

Posted by Cheese at 4:20 PM No comments:

I asked the poe-news guys what scares them and figured I will draw what they say for a few weeks. Here is my fave one of the day.

I liked it so much I did it twice.

Actually this one was first, but looked too much like a bunch of worms or cigarettes.

I got another I really like I have penciled and will ink on Friday maybe.
Posted by Cheese at 10:37 PM No comments:

So I just ruined a large pile of 11x17 paper and am feeling guilty about it.  So it's not a total wash, I am going to do a bunch of monsters on them in a salute to Halloween being around the corner.   Here are the two I did at the office tonight.

These kinda go along with my running theme of late, creatures of darkness. This past summer I worked on a project for an art show in Los Angles at Chris Prynoski's animation studio, Titmouse, Inc. the theme of which was a Tribute to Gary Gygax. My piece was a recreated notebook from a High School junior, complete with cribbed calculus notes and about a dozen or so highly rendered pencil drawings of monsters and mayhem. It turned out really well and more then likely you will see it in print before MoCCA 2009.

Cheese
Posted by Cheese at 12:20 AM No comments: 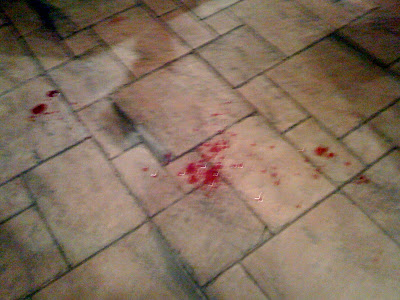 To say the end of last night's comic jam was exciting would be appropriate.
So there we were, minding our business, jamming along, having a gay ole' time when this little Irish dude comes down into our room and takes a seat at one of the empty tables.  Not an uncommon occurrence in Demsey's. There are often wandering drunks exploring the catacombs of the building, it's part of it's charm; Dungeons & Drunks.  So, Little Mick the Drunk Elf comes down and plants himself there for a few minutes alone.  Soon enough he is joined by a rather large pal.  At first they seemed friendly enough, whispering softly to each other.  When they first grappled, it seemed like a brotherly embrace, then the big guy took Little Mick's head and bashed it into the bar, causing about a pint of blood to spurt out.  They continued to throw each other around for another minute as I ordered everyone to clear out (telling dashing Dave McKenna to get the bartender).  Little Mick kept up a decent fight for a minute or two until the other guy picked him up and dropped him on his head, he was out like a light after that.  As his eyes rolled back into his head, blood began to spread on the floor.
By the time the bartender came down I was kneeling over Mick, making sure he was alive and the big guy was charging for the door, I told the Bartender to to grab the guy, and he seemed to go after him, but he came back empty handed.  Evan was on the phone with 911, but they kept getting the address wrong.  They still hadn't arrived when we split.
Mick came around a minute later and walked off to the bar and from last I had heard they were serving him another drink. We paid up and cleared out pretty quick after that.
It was a red stained exclamation point to a pretty decent night of comic bookery.
Posted by Cheese at 11:54 AM No comments:

We had a pretty decent year at the Small Press Expo this year, we got a decent amount of attention, some nice sales numbers and drank more booze then anyone else there, again.
We got in early on Friday evening, met up with a few pals, had a few drinks and moseyed over the the most average diner on earth for a completely adequate dinner.  Then we went back to Rafer Roberts room and drank a case of beer before going down to the main bar and mingling with the rest of the early arrivals. It was a nice way to slip into the weekend, very relaxing.
The big news of the show was the reaction to Kate Allen's Milk-Teeth, it was an off the rack seller.  We kept putting them out on the table and half an hour later they'd be gone, it was really fun to watch.  Kate was also inundated with drawing requests, my personal favorite being two guys that saw a doodle she did with a sexy girl and a corn dog and they HAD TO HAVE personalized drawings of some sort of corn dog persuasion in their sketch books.  Classy.  At least she made a few bucks outta them.   She ended up getting more then a few publishers sniffing around, I fully expect her to be snatched up by one of them fairly soon.  I am becoming the Kevin Smith of comics.  If Miss and Kevin are my Matt Damon and Ben Affleck, then maybe Kate is my Jason Lee, but without all that creepy Scientologist weirdness. So be it, as long as they continue to come back and do my shitty books, who am I to complain?
Anyways, Saturday night was our annual victory dance at Athenian Plaka (the best greek food I've ever had) we rushed back to see the Ignatz Awards, a chocolate fountain and the return of the drag-cheerleader.  Not to mention more mingling, more drinking and more late nights smoking out the windows.
Sunday was a bust.  A much as Saturday was great, Sunday sucked.  The attendance was half of what it was on Saturday.  The drop off was astounding.  It was like being at a convention the day after it closed. OK, maybe not that bad, but pretty awful nonetheless. We pulled up stakes and hit the highway as soon as we could and cruised home at 80 the whole way, dropping everyone off in town around 10 pm, safe and sound.
So with another successful year behind us we look forward to the next show, most likely Tcaf in Toronto next Spring (May 9-10, 2009).
I got a few nice things, and some real stinkers.  I did miss out on what looked like the most awful thing there, there were these guys in the corner who were greeting folks with, "Hello, welcome to the Action Comics Unlimited Outpost!" and were hocking some really choice superhero books — and by choice, I mean holyshitbad.  Team 12 Man-at-Arms Dave McKenna searched out the only two legitimately porn comics at the show, both were pretty nice, although one was a little too cutesy for me. Kate found a really nifty mini from the guys who do Strange Detective Tales (one of my secret faves from last year) about a alien invasion, with nudity!  I'll do a full rundown later, over the weekend most likely.  Shit, it's time to get ready for the Jam, see you there.
Cheese
Posted by Cheese at 1:07 PM No comments:

House of Twelve Comic Jam this Thursday
Fresh back from our trip to beautiful Rockville, MD and the awesome Small Press Expo Team 12 invites you — one and all — to our monthly Ho12 Comic Jam.  Join New York's finest young purveyors of dick and fart jokes as we get drunk and draw comics.  All are welcome, but be sure to bring your pencils, paper and thirst for excitement, booze.
Come on out and say hello,
Thursday, October 9, 7 pm
Jack Demsey's Pub
36 West 33rd st., NYC
In the basement
7 pm - 11ish
What is a "comic jam" anyway?
At it's base, a comic jam is when a group of artists get together and draw a single story.  Formats vary between various jams and groups, ours tend to stick to this standard system: One person draws a single panel that sets the setting and characters, then the page is passed to the next person who draws the second panel, they then pass it to another and the process continues.  THis goes on until A) someone makes the perfect gag for the situation, B) it runs out of steam, C) it is put out of its misery for just being too goddamn awful.
The original San Francisco Undergrounds did many comic jams, and not unlike our own, they are drunken messes involving numerous references to male genitalia and farts.  We feel that the tradition of drunk cartoonists should be carried on and passed down to the youth of tomorrow.  "Booze, Comics, Loneliness!"  This is the cartoonists creed.
The Ho12 Comic Jams have been going strong since 2001 and have been a great place for New York's up and coming artists to cross pens with some of the best and brightest in the community.  Many of our regulars are regular contributors to not only the House of Twelve titles, but have been published by some of the best alternative publishers around, come on out and shake hands with the best.
Posted by Cheese at 6:25 PM No comments: