Hey there folks, the next Jam is scheduled for Thursday, September 2, 7pm at Jack Demsey’s (36 w. 33rd, NYC). We’re penciled in for our usual basement room, but keep in mind that this time of year we often get pushed up to the Attic room, so if you don’t see us, double check! As always, check out the Facebook page and RSVP so I have an estimate to tell the bar. Weeeee!

For the cover of Ho12Monthly#1 I posted a little "How I Did This" series of pics and descriptions and people liked it so I figured I do it again for the second issue's cover.

When we first did the book I had a different cover in mind, I even finished one (as seen in this previous post) but as things progressed and I saw more contributors stories it became evident the book needed a nicer cover (the old one got cut down and is now the issues back cover).

For inspiration I looked to Dave McKenna's story which featured a Pterodactyl and Fred Noland's story which has a decidedly environmental theme. With the recent oil spill in the Gulf of Mexico, I figured a mash-up of these ideas would make a funny, yet poignant mix.

I started out with some doodles I did in Dave McKenna's sketchbook while manning the table at an indie comic show in New Haven, CT. 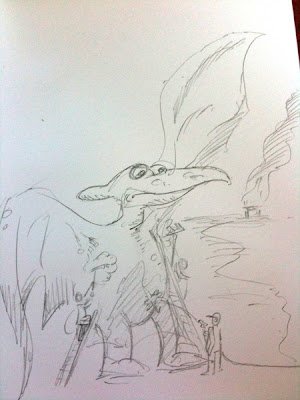 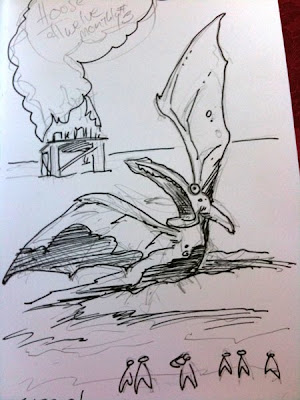 Then we went to Louie's Lunchbox and got cheeseburgers. 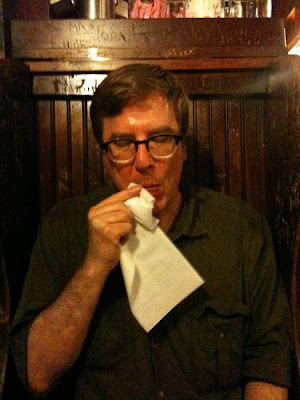 We enjoyed them very much.

Afterwards, I did a larger sketch in my own book, took a snapshot of it with my iphone and laid down some color ideas. 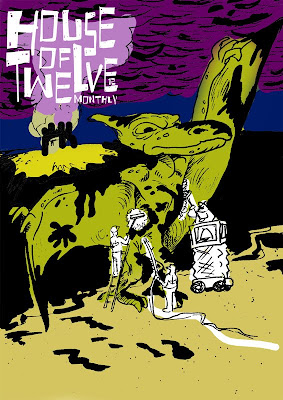 That same day, Kevin Colden and I were talking about the program Manga Studio and how much he liked it. I found it on sale at Amazon for $2o (I had $20 in credit from pre-ordering Red Dead Redemption, making it essentially free) so I picked it up. It arrived few days later so i plugged in the Wacom and started playing around with it. I first did a sketch of the cover on it, then cleaned up that in a blue line layer. 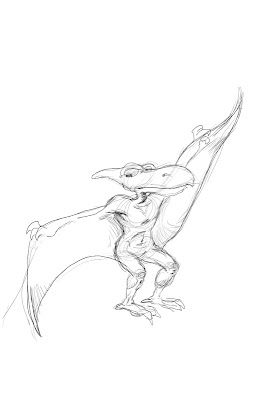 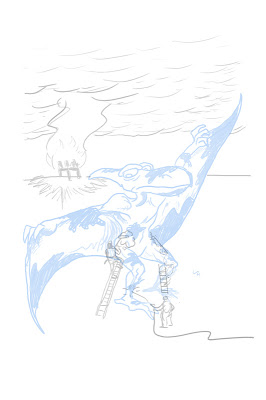 Manga Studio has some pretty great inking tools in it, I gotta admit, I'm pretty smitten with it. 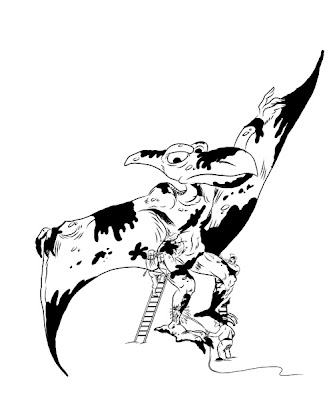 Not knowing how to use the color system in MS, I imported the inked sketch into photoshop as layers and colored the bitch. 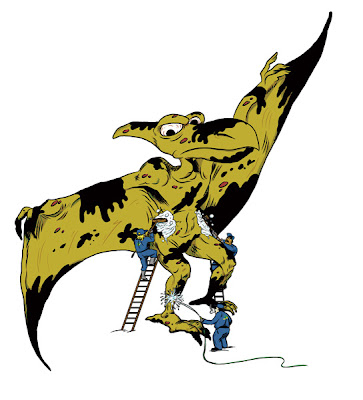 That came out swell, but I still needed to do the background. I started looking up some photo reference for the ocean, clouds and oil rigs.

I chose this ocean pic from someone's wallpaper site. 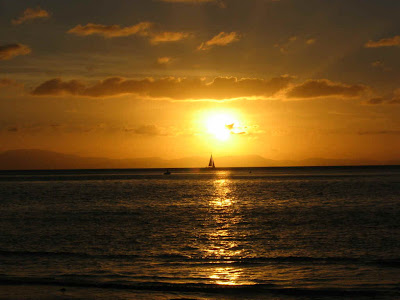 This shot from above the clouds from some random girl's photostream (I then flipped it upside down)... 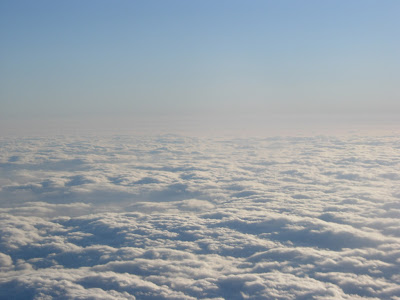 and was freaking astounded to find actual photos of an oil rig exploding. The guy had a whole set of these, from a little smoke to full blow BLAMMO! 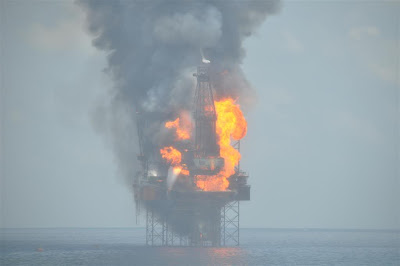 I guess that happens more often then anyone would like to tell you. Crazy!

Anywho, I combined them in photoshop and turned the tolerance way up, getting a rough idea of what I wanted. 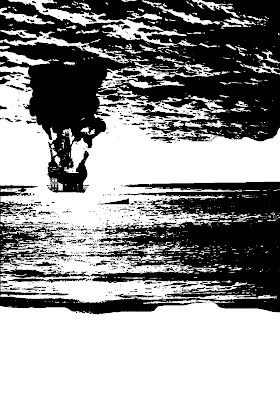 I then sent it over to Manga Studio and made a blue line layer out of it. 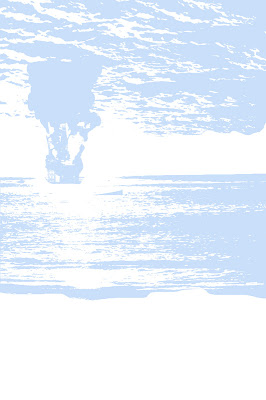 I used that as a guide and inked the background straight over it. 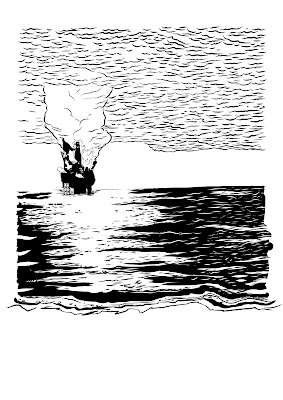 That came out pretty sweet!

I had been playing with the color tools in Manga Studio a bit by then and tried my hand at coloring it there, getting some pretty good results, especially on the top half. One thing I couldn't figure out was on the ink layer the program treats white areas as a opaque, creating large parts of the bottom half I couldn't color correctly. Phooey! 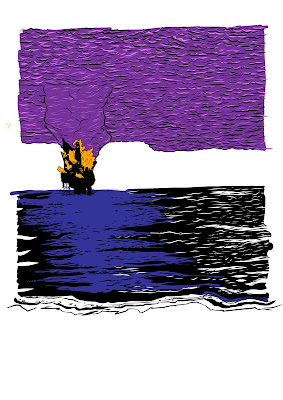 Suffice to say, it was back into photoshop where I was able to finish the coloring, add a gradation to the rig explosion and some shading to the cloud layer. Sadly I didn't think to keep copies of any of this, sorry folks.

After a few finishing touches I merged the fore and backgrounds, dropped in the Ho12 Logo and bing-bang-boom, ladies and gents, we have a cover. 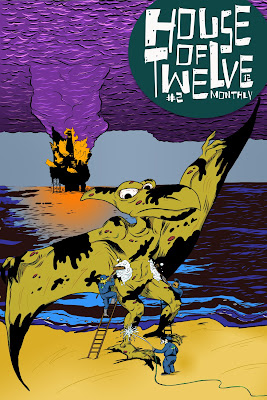 It maybe took four hours start to finish for the foreground image, about three hours to research and draw the background, another two to figure out the color for the BG and maybe another hour to combine it all and call McKenna and get his opinion. So we're looking at about 10 hours total from doodle to finished piece. I'm sure I could have cut that by two hours if I had a better understanding of Manga Studio, I still don't know what half the buttons and do-dads actually do. Oh, and Smith Micro (makers of MS) what the fuck? No eyedropper? Shiiiiiiit. I hear there's a plug in that has it, I gotta look that up, taking crib-notes on an RGB slider scale over what colors I'm using is a suckas game.

The whole book should be available in a few weeks via Comixology's Comics app for the iDevice of your choice. It's packed with great stuff from David Paleo, Kate Lacour, Fred Noland, Dave McKenna and myself. These things just get better and better looking as we go along. I'm really proud of this one, I hope you all like it as much as I do.